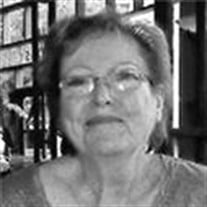    Lynnette Marcelle Goodwin, 73, was born in Houston, TX on December 1, 1941, and died in her home October 20, 2015 in Austin, TX, with family around her. Lynn graduated from the University of Houston with a Masters degree in Sociology and Education. She worked for the Texas Department of Family and Protective Services for over 32 and retired in March, 2008. Lynn was an incredibly loving and caring daughter, sister, cousin, niece, step-mom, aunt, and had many friends. She loved to read, watch dancing, spending time with her family and friends, playing games, especially Sequence, supported Austin Arts and traveled to placed in Europe and all over the United States. Lynn is survived by two step-children, 10 step grand-children, her mother, Pauline Robicheaux; her sister Brenda Abercrombie, her husband, Tom; their two sons, Jeffrey Thomas; and James Donald, and his wife; Lorelei, and their three children Sydney Raine, Reagan Summer, and Dylan James. Her sister, Pamela Robicheaux; her brother, Evans Robicheaux Jr., his wife, Stephanie, and their daughter, Danielle. She is preceded in death by her grandmother, Dollie Avery; dad, Evan Roicheaux; step-son, Wayne Goodwin; Aunt Roberta Lambert, her husband Don; Uncle Kenneth Avery, his wife Mary; and Aunt Nellie Pittman. Also her beloved cocker spaniel, Cinca. Funeral Services will be held on Friday October 23, 2015, 9:00am at the Covennt United Methodist Church, 4410 Duval Road Austin, Tx 78727. Reception immediately following services at the church.

The family of Lynnette Marcelle Goodwin created this Life Tributes page to make it easy to share your memories.

Send flowers to the Goodwin family.