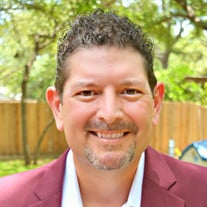 Marco Adrian Martinez passed away on August 15, 2017, after a courageous two-year battle with colon cancer. He is survived by his wife, Nita; children Connor (8) and Josephine (6); mother Bertha Cantu Martinez; and uncle Edward Martinez. He was preceded in death by his father, Ernesto, and uncle Eliseo A. Cantu. Marco was born on April 8, 1969, and was adopted as the only child of Bertha and Ernesto Martinez. His parents’ example led Marco to develop a love of sports, a competitive spirit, personal discipline and friendship skills that would later endear him to anyone he met. During his Crockett High School years, Marco embodied persistence as he played baseball and earned the title of all-state wrestler. Even before college, he began to research a potential career in medicine, leading him to become the youngest certified EMT in Texas at age 18. Marco attended Texas A&M, but went on to play baseball at Texas Lutheran University until graduating in ‘92. He continued sports after college, playing and managing a men’s senior league baseball team and becoming an avid golfer. He thoroughly enjoyed his baseball and golfing buddies and especially the mental and competitive aspects of sport. After graduating from TLU, Marco sold copiers door-to-door for Austin Business Machines while also working as an EMT. He later worked his way up through the ranks in the Texas Legislature to become director of House bill analysis. During his tenure in public service, he also served as chief of staff for Travis County Commissioner Margaret Gomez. Working in sales and marketing at Dell for 14 years, Marco was honored with awards for sales representative of the year and manager of the year. His career concluded as vice president of sales at PDME, Inc. His father Ernesto died when Marco was 26. Marco’s gratitude for his father’s lessons inspired his own parenting style and served as a reminder to live as the person he wanted his children to become. Marco and fellow native Austinite Nita Patrenella were set up on a date by mutual friends and the couple became engaged on Marco’s birthday four months later. They married in 2004. After moving to the Balcones Country Club neighborhood, Marco and Nita led and developed a strong community of families by organizing family-friendly events and coaching youth sports. Marco was a fanatical Texas A&M sports fan and developed special friendships through the online ‘Aggie Yell’ group. This group supported Marco during his cancer battle, providing lodging in Houston for MD Anderson visits, delivering meals to the hospital, and whatever else was needed. He had never met many of these men before in person. His family thanks this special community for all of their support. In August of 2015, Marco was diagnosed with Stage IV colon cancer. He published a weekly blog (http://tworedstwobrowns.blogspot.com/) about his journey with cancer, which achieved a readership of a few thousand loyal followers. An event for Marco’s book signing was scheduled the week he passed away; he had just published 265 Likes for a Fart: A Year in the Life of a Father, Sports Fiend, and Movie Buff Battling Stage Four Cancer. Even during his fight against cancer, Marco made new friends through his inspiring attitude and welcoming personality. He dubbed his treatment room at Texas Oncology as “chemo camp.” The family would like to thank Drs. Netaji, Lakshman, Shaw, and Hemphill; MDA oncologist Dr. Kee; the NAMC 3 North nursing team; Marco’s respiratory therapist team and social workers for Marco’s exceptional care during the past two years. In lieu of flowers, please consider donating to the following organizations that were especially helpful to The Martinez Family during Marco’s cancer treatments over the last two years: Without Regrets – Without Regrets Foundation is a non-profit, volunteer-run organization that helps families with a gravely ill parent dream up and live out precious family experiences. Wonders & Worries – This organization teaches parents how to parent and kids how to cope during a parent’s illness. Families are welcome regardless of the stage or severity of illness and services are free of charge. Texas Oncology Foundation – Marco’s local oncology office and infusion laboratory. Here is a link to their foundation that assists local cancer patients in the Central Texas area. Hope Children’s Center (include a note with your check designating the contribution in memory of Marco Martinez) – Preschool that Connor and Josephine attended during Marco’s initial diagnosis. Please mail donations to: Hope Children’s Center, 11512 Olson Drive, Austin, Texas 78750. Contact Norma Vickers with your questions: (512) 258-0101.

Marco Adrian Martinez passed away on August 15, 2017, after a courageous two-year battle with colon cancer. He is survived by his wife, Nita; children Connor (8) and Josephine (6); mother Bertha Cantu Martinez; and uncle Edward Martinez. He... View Obituary & Service Information

The family of Marco A. Martinez created this Life Tributes page to make it easy to share your memories.

Send flowers to the Martinez family.