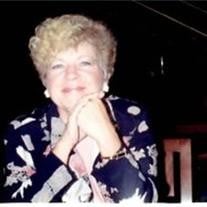 Margaret Kathleen Green (née Kile), 75, of Fair Oaks Ranch passed away on Saturday, March 10, 2012 after a two year battle with cancer. Margaret was born in Opdyke, Illinois on October 13, 1936 to Obed and Elsie Kile. She had four older brothers Richard, Raymond, Clifford, and James, and one younger sister, Elizabeth. Margaret grew up in St. Louis, Missouri where her father owned a hardware store, and her mother owned an antique store. During her youth, Margaret enjoyed playing sports and singing with a Sweet Adelines quartet, The Mis-Chiefs. Margaret graduated from Soldan High School in 1954. Margaret was married to Anthony Gorman from 1956 to 1972 and together had two sons, Anthony Alexander in 1965 and Grant Christian in 1967. Margaret was certified in Montessori training and was on the board of directors at St. Louis Montessori Academy. In 1977 Margaret met Larry Joe Green in St. Louis and was married in 1978 and lived in Phoenix where Larry was stationed at Luke AFB. The couple was transferred to The Netherlands and had a daughter, Loren Marie in 1982. Margaret began her career here working as a director for the Camp New Amsterdam Base Nursery. Margaret made many changes to the way the center was run by incorporating her knowledge of Montessori methods which were instituted Air Force Wide. The couple was then stationed in Germany where Margaret also ran the Child Care Center at Sembach AB. After Larry?s retirement from the Air Force, the family moved to Colorado Springs where Margaret was the director of the Child Development Center and then later the Flight Chief for the Morale, Welfare, and Recreation flight at Peterson AFB. When the couple moved to San Antonio, Margaret became the director of the Child Development Center and later became the Flight Chief of the Services Division at Lackland AFB where she eventually retired in December 2006. After her retirement, she began working as a freelance travel writer, traveling to and writing feature articles about such places as Mexico, Spain, Ukraine, and Thailand. Margaret is survived by her husband, Larry Green ret. USAF, three children Alex Gorman (Alexandra) of Sacramento, CA, Grant Gorman (Tracy) of St. Louis, MO, and Loren Tarnow (Derek) of Austin, TX. She is also survived by her sister Elizabeth Anderson (Robert) of St. Louis, MO, and grandchildren Sabrina Gorman, Valeriya Gorman, Eva Gorman, and the expected birth of Miles Tarnow in April. Margaret?s life will be celebrated by family and friends in her home in Fair Oaks Ranch, Texas on Sunday, April 1, 2012 at 2:00 pm. In lieu of flowers or cards please make donations in her honor to The Boys & Girls Clubs of America, The Cholangiocarcinoma Foundation and/or The Kidney Foundation.

Margaret Kathleen Green (née Kile), 75, of Fair Oaks Ranch passed away on Saturday, March 10, 2012 after a two year battle with cancer. Margaret was born in Opdyke, Illinois on October 13, 1936 to Obed and Elsie Kile. She had four older brothers... View Obituary & Service Information

The family of Margaret Green created this Life Tributes page to make it easy to share your memories.

Send flowers to the Green family.