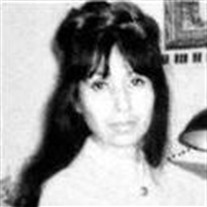 Maria Ramos Holmes, beloved mother, grandmother, great-grandmother, and sister, passed away on October 4th, 2014, at the age of 82. Maria was born in Austin, Texas on February 10th, 1932, to Julia and Ramón Ramos. She grew up on Red River St. and took an interest in the Arts at an early age. Throughout her life, she had a love of painting, drawing, and music, which she shared and passed on to her children and grandchildren. A devout Catholic, she participated in various church programs. Maria was married to George Holmes for 29 years until 1982. She loved nature and conservation, as well as a flair for fashion and style that will not soon be forgotten. She worked for Texas Mailing and Printing for the Wendlandt/Saegert Families. She was a wonderful cook and had many specialties. Maria loved to talk about her first love, a 1956 convertible Corvette. Maria could be seen driving her beloved VW Beetle across Austin, and standing before finished works of art which reflected the many landscapes she had traveled across during her lifetime. Like the steadfast mountains and birch trees, often subjects of her paintings, Maria's strong comforting presence will remain with her family, always. Maria is survived by daughters, Alana Holmes, Vivian Holmes, Michelle Holmes Banks, and Raquel Holmes; sons-in-law Clifford Dayton and Roger Banks; grandchildren Katherine "Niki" Holmes, Hana Banks, Wesley Dayton, Samuel Banks, Christopher Malina, Diego Dayton, and Jacqueline Holmes Toth; great-granddaughter Lilliana Dayton; sister Bertha Barba, brother Frank Ramos and many nieces and nephews. She was preceded in death by her parents; brothers Gilbert and Raymond Ramos, and sisters Alicia Ramos and Josephine Moraga. Services will be held at St. Ignatius Catholic Church on Friday, October 10, 2014; Rosary at 10:00 a.m., Mass at 10:30 a.m. Internment to follow at Assumption Cemetery

Maria Ramos Holmes, beloved mother, grandmother, great-grandmother, and sister, passed away on October 4th, 2014, at the age of 82. Maria was born in Austin, Texas on February 10th, 1932, to Julia and Ramón Ramos. She grew up on Red River St.... View Obituary & Service Information

The family of Maria Ramos Holmes created this Life Tributes page to make it easy to share your memories.

Send flowers to the Holmes family.