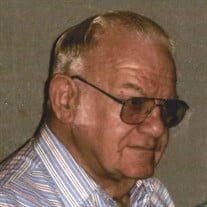 Marvin L. Ploeger passed away at home on December 10, 2015 of natural causes. He was born on August 23, 1936 in San Antonio, Texas. His parents were Rudolph George and Selma Mae Ploeger. He was baptized on January 13, 1938 and confirmed at Grace Lutheran Church in San Antonio, Texas. He graduated from Austin’s McCallum High School in 1955. Marvin married Ernestine Huebel on June 15, 1957 at Faith Lutheran Church in Austin, Texas. Marvin and Ernestine spent several years traveling to different states taking pictures of office personnel, and U.S. Government and military base personnel. He became a Tom Houston Peanut Company dealer in Waco, Texas. He later became a Snap-On Tool dealer before buying his own auto repair shop, “Ideal Auto Repair” in Harker Heights, Texas. He retired in 2010. Marvin and his wife had two children, Brenda and Lloyd. He attended all of their activities which included Girl Scouts and Boy Scouts, flag football, church activities at Immanuel Lutheran Church in Killeen, Killeen High School Band and Killeen High School football. Marvin and Ernestine purchased a home in Harker Heights, Texas in 1963 when their daughter was a 1 year old. Their son was born 3 years later. Marvin still lived in this home at the time of his death. Marvin was one of the founding fathers of the Harker Heights Volunteer Fire Department and was assistant chief for the department. He was also their training officer. Marvin loved the work and attended training school in Bryan/College Station each summer. Marvin’s hobbies included woodworking, fishing, camping in his motor home, and hunting. He loved talking to anyone who would stop and listen to him. He will be missed by his family and friends. There will be a hole in the hearts of all of us who knew and loved him. He was proceeded in death by his mother Selma Mae Ploeger, his father Rudolph George Ploeger, and his grandson David Alan Anderson. He is survived by his wife, Ernestine Ploeger of 58 ½ years; his daughter Brenda Camp and husband Don of Cedar Hill, Texas; son, Lloyd Ploeger of Glenn Heights, Texas; brother Raymond Ploeger; grandchildren, Lisa Anderson, Brendon Camp, Patrick Camp, Carl Camp, Kerri Camp, and Brandi Camp Kinikin; great grandchildren, Jeni Kinikin, Jami Kinikin, and Jodi Kinikin; as well as many extended family members and friends. Funeral arrangements will be made by Affordable Burial and Cremation at Immanuel Prince of Peace Lutheran Church in Belton, Texas on Monday, December 14, 2015. Visitation will be from 12:00-2:00 PM. The service will begin at 2:00 PM. Procession will begin following the service with a short graveside service at Pleasant Hill Cemetery in Nolanville, Texas. Members of the Harker Heights Fire Department Honor Guard will be a part of the funeral and procession. In lieu of flowers, the family requests any donations be made in Marvin Ploeger’s name to the City of Harker Heights Fire Department.

Marvin L. Ploeger passed away at home on December 10, 2015 of natural causes. He was born on August 23, 1936 in San Antonio, Texas. His parents were Rudolph George and Selma Mae Ploeger. He was baptized on January 13, 1938 and confirmed at Grace... View Obituary & Service Information

The family of Marvin L. Ploeger created this Life Tributes page to make it easy to share your memories.

Send flowers to the Ploeger family.