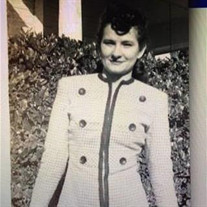 Mary Ann Bartosh Gillespie had a long and full life.  She graduated early from high school in Weimar. Ann then went to Blinn College in Brenham Texas. While there the government came and took a bunch of the students to work for the War in the Consolidated Steel Shipyards in Orange, Texas and Ann was one of them. During the war she kept track of all the ships being built for WWII, the parts used on them and documented the repairs made to them. Ann was recruited by the USO, along with several of the young women, to socialize with the sailors during USO activities. Ann had a LOT of fun going to the USO dances and to the skating rink parties. After the war she moved to Houston, TX, got married and had 2 children. When she found herself raising two small children, she got a job, despite having no car, so she could support them. Ann went to night school to further develop her secretarial skills. She worked at Eastman Kodak for many years and was in charge of many salesmen. Although she worked, she and her oldest granddaughter would make the drive from Houston to Weimar each weekend to see her mother. When she retired, she continued to work for temporary agencies until she was old enough to get social security and her Kodak retirement. Mary Ann loved to dance and when she retired it was her great JOY to dance as much as she could. She clogged, swing-danced, square danced and ballroom danced. The ballroom dancing was her very favorite and her favorite dance was the jitterbug. She was so good that many of the young men wanted her to teach them the “steps”.  She was also very active in a dancing group in Houston that frequented senior centers around Texas for many years. She loved dancing so much that she would travel to the “Valley” of Texas for the square dances down there. She would meet all her friends there so they could dance together. She also enjoyed going to the beach, water-skiing, and playing tennis when she was young. She liked musicals and took her daughters to see them when they were young. One favorite of hers was “South Pacific” and she saw it many times with her girls. To keep her mind sharp in her later years, she did crossword puzzles and especially like the ones about movie stars and movies Mary Ann loved her family. It was very important to her to meet with her siblings whenever she could. She also loved spending time with all of her grandchildren and great grandchildren. She would often schedule her visits with her two daughters so that she could be involved with all the great-grandchildren’s sports and activities. She would go to rock climbing, soccer games, swim meets, softball/baseball games or whatever they were into so she could be involved in their lives. She just loved to watch them perform and play. Her parents and two sisters precede her in death.  Her younger brother James Bartosh is her last remaining sibling. She enjoyed traveling. She made many trips with her friends, some of which include, Acapulco, Canada, Hawaii, and a road trip to California and several states in between. Love and miss you. She would want you to know, ”Don’t cry for me I’m in the next room dancing”.

Mary Ann Bartosh Gillespie had a long and full life.  She graduated early from high school in Weimar. Ann then went to Blinn College in Brenham Texas. While there the government came and took a bunch of the students to work for the War in the... View Obituary & Service Information

The family of Mary Ann Bartosh Gillespie created this Life Tributes page to make it easy to share your memories.

Mary Ann Bartosh Gillespie had a long and full life.&#160; She graduated...