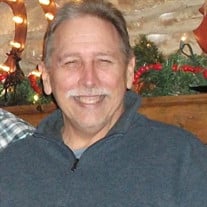 Michael Edward Butler passed away peacefully with his Brother and Sister by his side at his home on May 20, 2017 at the age of 64. On June 4, 2016 Mike (a non-smoker) was diagnosed with advanced stage lung cancer that metastasize to his brain. Mike was born in Houston on March 17, 1953 to Robert (Happy) and Margaret Jean Butler. His family moved to Austin when Mike was in sixth grade. He graduated from Reagan High School in 1971 where he was Manager of the football team from 1968 until he graduated in 1971. He attended Southwest Texas University majoring in Political Science and Accounting. While in San Marcos, Mike worked for the cable company and was a supervisor for the Parks and Recreation Department until moving back to Austin. Mike started officiating high school basketball with the Austin Basketball officials in 1988 until he retired in 2014. During his tenure, Mike served as a division representative, lead trainer, President, and was selected for two UIL regional tournaments. Mike elevated his officiating to become a college basketball official. He became a mentor to young officials where he would attend and teach at every referee training camp. Mike would ensure the game went smoothly, the rules were followed, and the coaches respected the game. Mike had a great relationship with many coaches and athletic directors. He was a person everyone could count on for solid and sound advice. Mike had a great relationship with The University of Texas Basketball programs. Mike was a scoreboard operator for UT for 25+ years for both the Men’s and Women’s teams. He worked NCAA post-season games hosted by UT and a Big 12 Basketball tournament. He served 8 years as NCAA basketball official. He also worked directly with UT to organize officials for their team basketball camps. He built such a strong relationship with the University of Texas basketball coaches that they often invited him to officiate their closed scrimmages. Mike also worked with Austin Spurs Basketball (San Antonio Spurs Development League affiliate.) He was the scoreboard operator for all home games at the HEB Center at Cedar Park until 2016. Additionally, Mike worked in finance as a Broker for several different companies helping new businesses in the Austin area. Some of his favorite things were The University of Texas sports, crunchy ice, unsweetened tea, Neiman Marcus bars, golf and Bone Daddy’s on his birthday! Mike kept a positive attitude throughout the entirety of his treatment. He never complained or showed any anger for his misfortune. Fred and Cheryl were blessed to have the privilege to care for Mike at home since his diagnosis. The siblings created a bond of respect and love to help them through this difficult time. The family would like to thank you for all the prayers and for the wonderful visits he had with so many people. It was great to hear him laugh at stories and listen to memories that you had all created. Mike is survived by his siblings Fred Butler and Cheryl Smith; nephews Hunter Smith, (fiancée Sara Linedecker) Hayden Butler; and many cousins and friends. Mike was preceded in death by his parents and grandparents (Margaret and Fred Thompson and Ollie Butler.) In lieu of flowers donations can be made to Shivers Cancer Center https://www.supportseton.org/give/seton-fund, Hospice Austin hospiceaustin.org/donation-form/, or a scholarship in Mike’s name to..www.bperrymanshootingcamp.com. This will allow kids to go to Basketball camp that would not be able to afford it. A Celebration of Life will be held Saturday, June 10th from 1 – 3 pm at the North Dining Room of Scholz Garten. Address: 1607 San Jacinto Blvd, Austin,TX. The family requests in Mike’s honor please wear his favorite color (burnt orange)!

Michael Edward Butler passed away peacefully with his Brother and Sister by his side at his home on May 20, 2017 at the age of 64. On June 4, 2016 Mike (a non-smoker) was diagnosed with advanced stage lung cancer that metastasize to his brain.... View Obituary & Service Information

The family of Michael Edward Butler created this Life Tributes page to make it easy to share your memories.

Michael Edward Butler passed away peacefully with his Brother...

Send flowers to the Butler family.