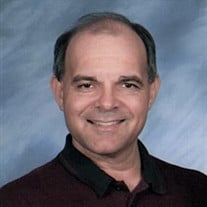 Michael Joseph Phillips, age 63, returned to his heavenly home March 7, 2021 after a valiant battle with a long and merciless illness. He is survived by his loving family: Mary, Ryan, Micaela and Marissa. He was the beloved son of Rosemary and... View Obituary & Service Information

The family of Michael Joseph Phillips created this Life Tributes page to make it easy to share your memories.

Send flowers to the Phillips family.