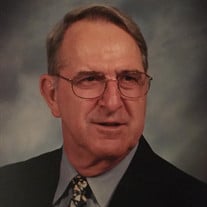 October 13th 1935 -June 18th 2019 Milton Jacob Lutz Jr, beloved husband, father and grandfather passed away peacefully Tuesday, June 18, 2019 in Austin, Texas. Milton was a resident of Austin, Texas for 8 years, moving into Brookdale Assisted Living October of 2018. Milton was the middle child of nine children of Milton and Josephine(Rihn) Lutz, he attended Saint Anne's Elementary School and was a graduate of Central Catholic High School, San Antonio, Texas. Following graduation he entered Saint Mary's University for 2 years later he joined the United States Army and spent a few years in Germany upon completion of his military service he returned to Saint Mary's University to complete his education and get his degree in Math and Science. Milton met the love of his life Beatrice P. DeRudder at a social dance held at Our Lady of Grace in the late 1950s, they were married on August 26, 1961. They started their family on June 2nd, 1962 with twins Michael and Mark. Other children included David Christopher and Lori Anne. Throughout his life Milton was guided by a strong Catholic faith and love of country and family as all his siblings were. Milton pursued a career in Dallas, Texas moving the family in 1964 to accept a job a Collins Radio and went on to have a successful career in the Telecommunications industry and traveling throughout the world. He enjoyed family reunions, his many nieces and nephews, baking and cooking. Dad loved to garden especially getting roses to bloom, make pancakes and tinker on cars or the house. He loved to be busy and working around the house. Milton is survived by his wife Beatrice and children Michael Lutz (Lydia Lutz),Mark Lutz David Lutz (Kathy Lutz)and Lori Ann Lutz Kerrigan(Brendan Kerrigan). He took great pride in his six grandchildren Michael Jacob Lutz Jr, Megan Ann Lutz, Michele Elizabeth Lutz, Matthew Christopher Lutz, and the twins Madeline Rose Kerrigan and Jacob Edward Kerrigan. Funeral services Services will be held at Saint Catherine of Siena Catholic Church on Monday June 24th. 9.30 am Rosary followed by Mass at 10 am.

The family of Milton Jacob Lutz Jr. created this Life Tributes page to make it easy to share your memories.

Send flowers to the Lutz family.