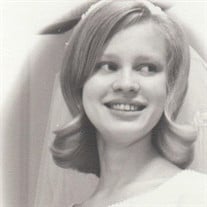 Miriam Wells passed away peacefully on February 9, 2017 in Austin, Texas after a long battle with Alzheimer’s disease. Miriam was born in Sioux Falls, South Dakota, on August 13, 1948, the daughter of Avis and Elizabeth Benson. Miriam attended University of Iowa and Oklahoma State where she received a Bachelor of Education. Miriam was a devoted mother, grandmother, sibling, daughter, teacher and friend. She inspired students and opened her home to those in need. She always made people feel welcome and was a gracious hostess. All who knew her were touched by her legacy of friendship, compassion, and quiet perseverance. Miriam is survived by her daughter, Dr. Jennifer Renner and her husband Dennis, her son, Matthew Wells and his wife Barbara and grandchildren Benson and Grace Wells. Family members include her mother, Elizabeth Benson and her siblings Marcia Benson, Yvonne and Russ Pettit, Naomi and John Yanta, Mark and Terry Benson, and Luther and Janet Benson; as well as many nephews and nieces. Preceding Miriam in death are her father and Luther minister, Avis Benson and her beloved dachshund, Rusty. Her family would like to extend a heartfelt thank you to the staff at Stonebridge Nursing Home and Hospice Austin for their compassionate care during this difficult time. A memorial service celebrating Miriam’s life will be held at 2pm on Monday, February 20, 2017 at Peace Lutheran Church at 10625 Ranch Rd 620, Austin, TX 78726. Memorial donations may be made to Boys and Girls Club of the Austin Area (www.bgcaustin.org/contribute).

Miriam Wells passed away peacefully on February 9, 2017 in Austin, Texas after a long battle with Alzheimer&#8217;s disease. Miriam was born in Sioux Falls, South Dakota, on August 13, 1948, the daughter of Avis and Elizabeth Benson. Miriam... View Obituary & Service Information

The family of Miriam Wells created this Life Tributes page to make it easy to share your memories.

Miriam Wells passed away peacefully on February 9, 2017 in Austin,...

Send flowers to the Wells family.