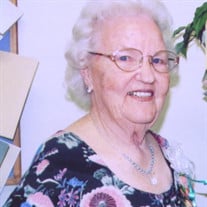 Myra Bernice Slaughter Cox of Temple, Texas, was born March 18, 1925 and passed from this life on October 9, 2019 at the age of 94. She was the daughter of Ivan Wingo and Sophia “Dinky” Slaughter. She is survived one daughter, Mary Anne Beverley Spyker, two sons, Ivan William Robert Cox and wife Barbara, Bobby Johnson Cox, Jr. and wife Joanna, ten grandchildren, seventeen great-grandchildren and one great-great grandchild. She was preceded in death by her parents, her husband, Bob J. Cox, Sr. and son-in-law James Spyker and daughter-in-law Beverly Cox, two sisters and four brothers. On graduation from high school, Bernice enrolled in Ozark Bible College where she met Bob Cox. She became his wife and partner in ministry. Together, through the work of Texas Evangelism they started over 25 churches in the state of Texas and assisted in the starting of more than 50 congregations. They were also instrumental in the beginning of Dallas Christian College where she served as a dorm mother and mentor to generations of students. She was a vital part of everything Bob did, organizing youth groups and ladies groups, she was known as a great student and teacher of the word. She wrote, directed and produced Christmas and Easter pageants that included children from nursery through high school. She was such an integral part of his ministry that Bob used to say if she died first, when they lowered the casket into the grave he would just lie down on top of it and say “throw in the dirt boys, I’m done for.” She was a generous, caring woman who was deeply loved by generations of family and friends. She was the epitome of the virtuous woman of Proverbs 31 and lived out the example of a Godly woman from Titus 2. Her works will live after her. A memorial service will be held at the San Gabriel Christian Church on Saturday, October 26th at 10 AM. James Franklin Duke officiating. Memorial contributions may be made to the Building Restoration Fund of the San Gabriel Christian Church.

The family of Myra Bernice Slaughter Cox created this Life Tributes page to make it easy to share your memories.