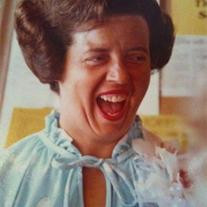 Patricia Ann Williams was born to Earl Joseph Williams and Isabell Elizabeth Krueger on March 17, 1942 in Highland Park, Illinois. Shortly after her birth, the family moved to Fox River Grove where she was raised to adulthood. She attended Crystal Lake High School, Crystal Lake, Illinois. Her Father, Earl, built a house in Fox River Grove, Illinois for the family during the WWII years and the late 40?s and 50?s to support the three sons and daughter. A daughter, Cynthia Ann Pakrovsky (1960) and son John Joseph Pakrovsky (1961) were born to Patricia during her first marriage. She married Rodney Leigh Pearson at Johnson Lake, Elwood, Nebraska in July 19, 1969. Rod and Pat with John and Cynthia moved to Austin, TX in September 1969 where he worked for Texas Instruments for nearly 30 years. Two daughters, Rhonda Lee Pearson (1970) and Victoria Lynne Pearson (1974), were born to Rodney and Patricia in Austin, TX. Pat worked as a Memory Chip Prober for the Engineering Department at Motorola in Austin, TX for several years and as a Tax Examiner for the IRS. She was an active member of Good Shepherd Lutheran Church. She was also in the Hand Bell Choir, and a volunteer worker in the Bethesda Thrift Store. She was very proficient in crocheting hats, scarves, and blankets. She was a vendor at several art and crafts shows in Cedar Park, Austin, and Horseshoe Bay. She was active in Good Shepherd Lutheran Church in Cedar Park, and a prior member of Redeemer Lutheran Church of Austin, TX. She leaves behind her husband, Rodney Pearson, daughters Cynthia, Rhonda, Victoria, son John, brothers Robert and Maureen Williams of Norco, CA, Thomas and Mary Williams of Ariza, CA., Cousin Mary Jane Castillo, Aunt and Godmother Shirley Williams in Anaheim, CA, and Godfather Harold (Kayo) Krueger. Son-in-laws Terry Garnett, Kirk Sebastian, and Danny Newlin, and many grandchildren, great grandchildren, nieces, and cousins. She was preceded by her parents, her brother James Williams, and infant son Mark Pakrovsky In lieu of flowers, donations may be made to the American Cancer Society or to Bethesda Thrift Store. The family would also like to thank Heart to Heart Hospice of Austin for their support during Pat?s illness

Patricia Ann Williams was born to Earl Joseph Williams and Isabell Elizabeth Krueger on March 17, 1942 in Highland Park, Illinois. Shortly after her birth, the family moved to Fox River Grove where she was raised to adulthood. She attended Crystal... View Obituary & Service Information

The family of Patricia Pearson created this Life Tributes page to make it easy to share your memories.

Send flowers to the Pearson family.