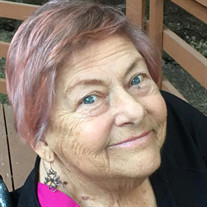 Pat Girard, a longtime resident of Corpus Christi and Ingleside, took an offer she could not refuse on April 28, 2018. She and God decided her new life plan will include praying, laughter, dancing, reunions, and endless love; keeping her busy for the rest of eternity. Daughter of the late M.L. Girard and Edna Cauthorn, Pat was born a fearless rebel April 5, 1939. Her father was a strong, independent, business man; a model she grew to love and emulate. Like her father, Pat was always known to do things her way, regardless of what others thought, but always did so with a big heart. Pat’s father was unnerved at the fact that she was so much like him, the path she chose was not the lady like path he had envisioned. Shortly after high school she set off for the University of Colorado, opened her first of many successful businesses in the sixties, developed and mastered both ceramic and fiber arts, married an old man (as her father called him) at the age of 37, and raised a hard-headed tomboy daughter. It wasn’t until the last couple of years of her father’s life that he decided her life path, choice of husband, and rowdy granddaughter were okay; and he loved her even more for having the guts to make her own mark in life. He even went so far as to tell her, “the old fart you picked out is a keeper.” At 67 Pat moved to Corpus Christi, quickly befriending a neighbor who brought her to what would be her new church home. While a member of St. Philip the Apostle Catholic Church, Pat went on several retreats, learned more about her faith, became an active member of the mission rosary makers, sponsored her daughter for RCIA, and was a supporter of the ACTS community. She grew to love this church so much they became a second family. This new life brought her much joy and happiness. At the age of 71 she was diagnosed with Goodpasture Syndrome and told she would be a dialysis patient for the rest of her life. After laughing vigorously at the name of her condition, Pat decided to bypass the pity parties, instead she found ways to continue traveling and loving life. At the age of 78 she was given the final obstacle she was to conquer before saying goodbye, a right below knee amputation. Doctors told her she would be lucky if she was healed within a year; she healed within 4 months. She was also told she may never walk again; challenge accepted! She not only walked again but did so with ease and enjoyment, much to the amazement of her prosthetist. This last year of her life she also relocated to San Marcos, in a neighborhood she adored. Her days consisted of feeding the local deer, bird watching, and just simply enjoying the peace and serenity of her new environment. She was able to celebrate her 79 birthday a few days late by attending the preview of Avengers: Infinity War, followed by a deep conversation about the state of affairs of Chris Hemsworth’s short hair. Since she recently became a connoisseur of hair, pink hair that is, she felt like Thor himself needed to be told to regrow his golden locks. The outing would be her last before starting on her new journey with God. Pat would often speak of things she would like people to know, advice that kept her spirit alive and active. She made the decision to be grateful, happy, and joyful for the full life she lead, instead of being sad about the roadblocks she hit along the way. Always be your best, do right by people, do not settle, wish your enemies well, love with all your heart, and never forget Jesus loves you. Pat is preceded in death by her parents; husband, Harold Newman; and oldest brother, Robert Girard. She is survived by her brother, Jerry Girard; daughter, Rynnee Newman, and son-in-law, Mark Martinez; step-children, Wallace Newman and Lindy Sohn; her spiritually adopted daughter and son, Faye and Daniel Nunnelee; and numerous step-grandchildren and great-grandchildren. We would like to invite you to celebrate the mark she left on this world. We will laugh, cry and remember her lively spirit while wishing her safe travels as she makes the journey to her new home. A memorial mass will be held at 10 a.m. on Saturday, May 12, at St. Philip the Apostle Catholic Church, 3513 Cimarron Boulevard, Corpus Christi TX 78414; followed by a reception with light refreshments. A rosary is being held at 7 p.m. on Friday, May 11 at the same location. In lieu of flowers, please consider donating to Pat Girard’s Dialysis Memorial Fund. One of the many things she enjoyed doing was cruising, something that became very expensive as a dialysis patient. Many people with renal disease will never travel again due to the financial burden. In her name, we would like to help economically strapped dialysis patients with the financial costs of dialysis while taking a cruise. We are currently working with Dialysis at Sea to make this dream a reality! You may donate online at GoFundMe.com, simply search for Pat Girard. You may also donate by check at her memorial service.

Pat Girard, a longtime resident of Corpus Christi and Ingleside, took an offer she could not refuse on April 28, 2018. She and God decided her new life plan will include praying, laughter, dancing, reunions, and endless love; keeping her busy... View Obituary & Service Information

The family of Patsy Ann Girard created this Life Tributes page to make it easy to share your memories.

Pat Girard, a longtime resident of Corpus Christi and Ingleside,...

Send flowers to the Girard family.