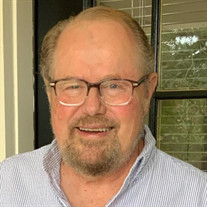 Richard (Dick) S. May died on November 7, 2020 after a swift but intense battle with metastatic prostate cancer. Dick was born on March 24th, 1952 in Buffalo, New York, as the youngest son of Robert H. May and Marjorie Thompson May. Dick grew into his own in St. Louis, where he flourished working in media and advertising sales, met his soulmate and raised a family. Dick was a man of passion and enjoyed many things – movies, reading, writing, politics, music, baseball – but he was most passionate about people. He was truly alive when spending time with people and never met a stranger. I know many people feel that the world will now be a little dimmer without his “historically accurate and completely unaltered” recounting of events. Dick is survived by his wife of 36 years, Theresa (Terri) A. May and his proudest accomplishments, his children: Adrienne N. May, Katherine May Bakke and Robert Hastings May III. He has also been promoted to guardian angel for his three grandchildren: Noah, Cheyenne, and Caroline. Additionally, Dick is survived by his older brothers Robert (Bob) May and Thomas May, and his youngest sister Marjorie (Cricket) Vidrine. He wanted it noted for the record books that he still had a good deal more hair than his brothers. Dick always told us he was going to live to be 100, and while cancer cut the years short, he lived far more life in 68 years than the number implies. He may not have made a fortune from any of his many “million-dollar-ideas” but he was a dreamer until the end. We will be hosting a memorial to celebrate Dick’s life on November 28th at 10am (CST), which we will stream live. Please reach out to [email protected] for a link to join us. In lieu of flowers, the family is asking for donations to Texas Oncology Foundation or better yet, help us fulfill Dick’s wish to make the world a better place by doing an act of kindness in his name.

Richard (Dick) S. May died on November 7, 2020 after a swift but intense battle with metastatic prostate cancer. Dick was born on March 24th, 1952 in Buffalo, New York, as the youngest son of Robert H. May and Marjorie Thompson May. Dick grew... View Obituary & Service Information

The family of Richard Sturgis May created this Life Tributes page to make it easy to share your memories.

Send flowers to the May family.