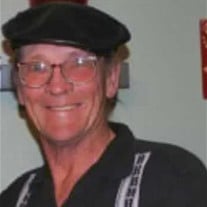 Richard “Rick” Lynn McBride 64, of Burnet, Texas passed away July 6, 2015 under the outstanding care of Hospice Austin Christopher House after a short battle with cancer. Rick was born September 21, 1950 in Los Angeles, CA to Fred Benjamin and Annie Grace McBride. He grew up in Anahuac Texas, moved to Clovis, New Mexico for several years, and then settled down in the Hill Country. Rick was a loyal and dedicated foreman for Marl Delz Paint Company in Kingsland, Texas for over 26 years. He loved his job, camping, football, playing the lottery and his two Grandsons more than anything. Rick was preceded in death by both his parents; his wife, Barbara of Rockdale; his brother, Gregory Lee McBride of Marble Falls; and brother-in-Law, Vic Butler. He is survived by his daughter, Jennifer Lilley of Baytown; sister, Georgia Butler of Lubbock; brother, Donald McBride and wife Glynda of Burnet; grandchildren, Kory Lilley and Kamrin Lilley of Baytown; special friend and companion, Virginia Kraatz; close friends, Gary and Christa Delz of Kingsland; and numerous nieces, nephews, cousins, and friends. The family will hold a Memorial Service at Sharp Cemetery in Milam County, Texas near Davilla at Barbara’s gravesite Saturday, July 18, 2015 at 1:00pm. Anyone wishing to attend is welcome. In Lieu of usual remembrances, contributions may be made to Hospice Austin 4107 Spicewood Springs Road, Suite 100 Austin, TX 78759 or www.hospiceaustin.org/get-involved-2/donate/

The family of Richard "Rick" Lynn McBride created this Life Tributes page to make it easy to share your memories.

Send flowers to the McBride family.