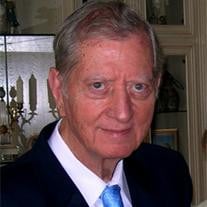 Dr. Richard Dobbs Strahan went to be with the Lord surrounded by his family in Round Rock, TX on November 22, 2010. He was born on August 23, 1927, in Fort Worth, TX to Oscar and Elizabeth Strahan. He is preceded in death by his parents and his older brother, James Oscar Strahan, and sister, Elizabeth Strahan Bayless Ball. Attending public schools in Fort Worth, he graduated Magna Cum Laude from Polytechnic High School, where he was editor of the school paper, a member of the National Honor Society, and competed in football, basketball, track, and baseball. Dr. Strahan attended Southwestern Junior College in Waxahachie, TX and completed a Bachelors of Science degree in Chemistry and Biology at Texas Wesleyan College in Fort Worth in 1948. While studying at Texas Wesleyan, he frequently filled pulpits for small Methodist churches in rural communities around Fort Worth. He was awarded a graduate scholarship to attend Southern Methodist University from which he received a Master of Education degree in 1949. While completing his master?s degree Dr. Strahan also taught science at Southwestern Junior College. He continued his graduate studies at the University of Houston and received a Doctorate in Education in 1953. Dr. Strahan began a distinguished career in higher education with an appointment as Academic Dean at Evangel College in Springfield, Missouri in 1955. In 1958 he began work as a faculty member in the College of Education at the University of Houston. During this time he started a bible study in his home resulting in the founding of Calvary Church in Houston. After being asked to begin a program in Educational Law at UH, Dr. Strahan took up the study of law and received a Doctor of Jurisprudence from the University of Houston School of Law. In 1965 he was appointed the first President of Lee College in Baytown, TX. Dr. Strahan presided over an important period of growth and development of the College, leading to recognition in 1971 as one of 25 outstanding college administrators in the U.S., an honor that included an invitation to the White House. In 1972 he returned to the University of Houston College of Education and took up the practice of law specializing in legal issues in education. As an attorney he was admitted to the bar of the Southern and Northern Federal District Courts in Texas and to the bar of the Supreme Court of the United States. Dr. Strahan retired from the University and his legal practice in 1997. He is survived by his wife of 60 years, Gladys (Gigi) Follett Strahan and four children: Richard (Rick) Strahan and wife Kerry of Austin, TX, Randall Strahan and wife Annie of Decatur, GA, Russell Strahan and wife Suzanne of Round Rock, TX, and daughter Sharon Strahan of San Antonio, TX. He was the proud grandfather of six grandchildren: Andrea Strahan, Alex Strahan, Destin Strahan, Derek Strahan, Lauren Strahan, and Christine Strahan. The family is especially grateful to the doctors and staff for the care our loved one received at The Lighthouse Hospice at Altenheim in Round Rock. In lieu of flowers a memorial donation may be made to Richard D. Strahan Scholarship at the University of Houston College of Education. Memorial gifts designated for the Strahan Scholarship, College of Education should be sent to Janis Parsley, UH Office of Development, 400 E. Cullen, Houston, Texas 77204-2013. A memorial service will be held at Second Baptist Church Chapel, 6400 Woodway, Houston, TX on December 15 at 1:00 PM.

Dr. Richard Dobbs Strahan went to be with the Lord surrounded by his family in Round Rock, TX on November 22, 2010. He was born on August 23, 1927, in Fort Worth, TX to Oscar and Elizabeth Strahan. He is preceded in death by his parents and... View Obituary & Service Information

The family of Richard Strahan created this Life Tributes page to make it easy to share your memories.

Dr. Richard Dobbs Strahan went to be with the Lord surrounded...

Send flowers to the Strahan family.