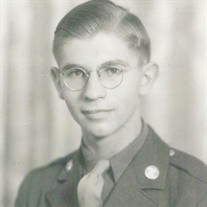 Robert Vernon Crawford passed away peacefully at home in Austin on Friday, April 20, 2017, with caregiver and family nearby. Robert was born in Bucyrus, Ohio to Vernon and Mildred Crawford on August 7, 1925. He served in the Philippines in World War II. He was briefly married to Marion Dooley and had one son, David, from that marriage. He later attended Shelton College, where he met his lovely future wife, Beverly Thomas, while they were decorating for a Halloween party. Robert and Beverly had four children during their long and blessed union. Robert earned a Bachelor of Divinity degree from Eastern Baptist Theological Seminary in Wynnewood, PA. After finishing the program, Robert was pastor first of a Methodist church, and then of American Baptist churches in Watervliet, NY, Cambridge, NY and Berlin, NH. Robert and his wife and children moved to Irving, TX in 1978, following the call of God. Robert worked at several jobs over the next several years, but always held his family close to his heart. Robert moved with his wife and daughter Judi to Plano, TX and lived there for twenty years before moving to Austin, TX in 2014 to live with daughter and son Kathleen and Kenneth. Robert is predeceased by beloved wife Beverly in May of last year, and by parents Vernon and Mildred and brothers Jim and Paul. Robert is survived by sister Ethlyn Beal; children David Willcox, Judith Black, Kenneth Crawford, Kathleen Walls and Keith Crawford; and grandchildren, great grandchildren and nieces and nephews. Robert was a gentle, kind and honorable man. He liked all aspects of nature, Scottish and German music, Robert Frost poetry, puns, tv quiz show Jeopardy, jigsaw puzzles and holding hands. The family would like to thank the staff of Hospice Austin, the staff and caregivers of HALO Senior Care and Texas Home Health, and the VA for much loving support, attention and care. Robert’s memorial service will be held on May 5, 2018 at 2:00 pm at First Baptist Church, located at 901 Trinity St, Austin, TX 78701. Robert Vernon Crawford will be buried at Fort Sam Houston National Cemetery in San Antonio, TX.

Robert Vernon Crawford passed away peacefully at home in Austin on Friday, April 20, 2017, with caregiver and family nearby. Robert was born in Bucyrus, Ohio to Vernon and Mildred Crawford on August 7, 1925. He served in the Philippines in... View Obituary & Service Information

The family of Robert Vernon Crawford created this Life Tributes page to make it easy to share your memories.

Robert Vernon Crawford passed away peacefully at home in Austin...

Send flowers to the Crawford family.