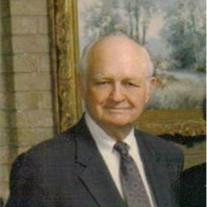 Dusty Rhodes, 93, died Friday, December 10, 2010 at Gracy Woods II Nursing Home in Austin, where he had lived for almost 8 years. He was born in Caney, Kansas to Charles and Doll Rhodes March 23, 1917. He grew up in Kansas, Oklahoma and Texas, but after all these years he considered himself a Texan. He went to high school in Weatherford where he was captain of his football team. During his youth, he spent summers working on the Ford Ranch in Brady. He went to the University of Texas and graduated in 1939 with a BS degree in Chemical Engineering. In 1942, Dusty married Foldine (Dena) Martin. They started their life together in Bartlesville, Oklahoma. Dusty?s work at Phillips Petroleum Corporation in synthetic rubber development and plastics kept him out of the war effort. Instead, he started up the ladder at Phillips. He worked in a number of roles over the years such as a member of the maintenance gang, an oiler, designing a butadiene plant, plant manager in Pasadena, and manager of plant operations of all Phillips chemical plants. His career at Phillips lasted 43 years. He retired as Vice President of Planning and Budget for the Chemical Division. Dusty and Dena moved to Austin in 1983. They lived for many years on the golf course at Onion Creek where Dusty worked on his golf game, gardening, his cats and watching out for friends and family around the neighborhood. He liked being back in Austin near his alma mater. Dusty travelled a lot for Phillips over the years, but found time to be president of the Little League, a lifelong member of the Rotary Club and a Deacon in First Presbyterian Church of Bartlesville, Oklahoma. Dusty was preceded in death by Dena in 2007. He is survived by Cheryl and Becky Rhodes of Austin, Bill and Barbara Rhodes of Irving and their daughter Jackie. The family would like to thank all of the staff at Gracy Woods II and the staff of Lighthouse Hospice. You took such good care of him that he stayed with us an extra year and a half. Contributions may be made in Dusty?s name to The Austin Academy www.austinacademy.org or the charity of your choice. A service to celebrate his life will be held at Central Presbyterian Church on 8th and Brazos on Saturday, December 18 at 2:00 pm.

Dusty Rhodes, 93, died Friday, December 10, 2010 at Gracy Woods II Nursing Home in Austin, where he had lived for almost 8 years. He was born in Caney, Kansas to Charles and Doll Rhodes March 23, 1917. He grew up in Kansas, Oklahoma and Texas,... View Obituary & Service Information

The family of Robert "Dusty" Rhodes created this Life Tributes page to make it easy to share your memories.