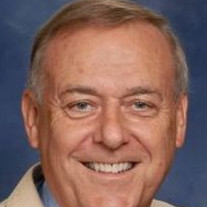 Roger Anthony Storer June 5, 1949 to April 3, 2014 Roger Anthony Storer, loving husband, father and grandfather, inspirational speaker and writer, author of two books, Distinguished Toastmaster, “Baby Whisperer”, and friend to so many, made his transition from his earthly body on April 3, 2014. Roger was born on June 5, 1949, in Nottingham, England, to Arthur and Ivy Storer. He graduated with an Honors degree in Electrical/Electronic Engineering from Lanchester College of Advanced Technology in Rugby, England. He was employed by General Electric and Texas Instruments in England before transferring to the United States in 1977. Roger held high level positions in marketing and customer and field support, first in Houston then Austin (1983), before leaving Texas Instruments in 1986 to pursue entrepreneurial ventures. In 1987, he co-founded Second Wave, Inc., an Apple Macintosh hardware peripherals manufacturing company, which he sold in 1999. He then created Lighthouse Estates, a subdivision in Jonestown, Texas, where he built a lighthouse home in honor of his father Arthur’s love of the sea. Roger was a charter member of the Today Toastmasters Club, which will celebrate its 25th anniversary in August. He thrived in speech competitions, winning multiple humorous and inspirational speech contests at the district level. He became the District 55 “Sound Man” in the 1990s, providing professional quality sound as a volunteer at district conferences for over 20 years. He achieved the highest designation of Distinguished Toastmaster. Roger shared his inspirational speaking talents at Unity Church of the Hills, where he spoke on service, gratitude, and turning the ordinary into the extraordinary. He loved children and was a regular volunteer in the baby room. He became known as “The Baby Whisperer” at the church because of his ability to calm any crying baby. His book, “Infants of Unity I.O.U” shares the lessons that children teach us. Roger was diagnosed with advanced stage prostate cancer on his 62nd birthday in June 2011. He wrote his second book entitled “Thank You, Cancer” to describe his cancer journey and how to turn the fear of death into the death of fear. Until April 3, 2014, Roger focused on living and taught us all to do the same. Roger is survived by his wife Lark Doley, his two sons Mark and David Storer, their mother Pat Wolfenbarger, their wives Adria and Kristin; and three granddaughters: Miralei, Calysta and Layne, all of Austin; and an uncle Jack Storer, cousins John Storer and Pat and Richard Mann and their families in England. A celebration of Roger’s life will be held at Unity Church of the Hills, 9905 Anderson Mill Rd., Austin, Texas 78750, on Saturday, April 26. From 1-2:45 p.m. in the Unity Pavilion friends and families will share “Roger Stories”, followed by a memorial service from 3-4 p.m. in the Unity Sanctuary. The family requests donations of time or money to Unity Church of the Hills in lieu of flowers.

The family of Roger Anthony Storer created this Life Tributes page to make it easy to share your memories.

Send flowers to the Storer family.