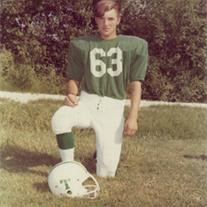 Memorial service graveside for Mr. Modrall Sr., Age 56, of Belton will be held Saturday (May 18th, 2013) at 10 AM at the North Belton Cemetery with Pastor Danny Brey. Mr. Modrall Sr. went to rest on March 17th, 2013 after heart problems; pronounced to death by his father?Charles R. Dague Sr., who died on February 13, 2003. Mr. Modrall Sr. was born in Abeline, Texas on August 17th, 1956 to his parents: Mr. Charles R. Dague Sr. and Margie Dague. Mr. Modrall Sr. was married and had two sons, to whom he was a loving father. He enjoyed sports, especially golf, which he played with his sons, Ronnie Jr. Modrall of Oklahoma and Geddy-Lee Modrall of Belton, Texas. Mr. Modrall Sr. had three brothers: Larry Modrall of Abeline, Texas, Charles Dague Jr. of Oklahoma, and Randy Dague of Oklahoma in addition to one sister, Milessa (Margaret) Dague Hammon of Belton, Texas. He worked construction with his uncle Dale Langlinz, where they built the first Ronald McDonald House as well as other homes in the area; Mr. Modrall Sr. also worked at Quality Tire and Friend Tire for years. Later, he moved to Oklahoma, working at a store until it was obliterated by a tornado. Mr. Modrall Sr. had attempted to rebuild the store until his deteriorating health forced him to move back home, where he spent the last of his days in the comfort of friends and family. May God bless Ronnie and cheer everyone up.

The family of Ronnie Modrall created this Life Tributes page to make it easy to share your memories.

Send flowers to the Modrall family.