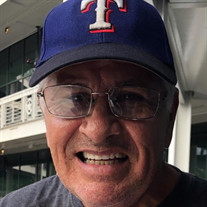 Born and Raised: Austin, Texas Longtime coach, loving father, son, and brother Roy Sosa passed on March 26, 2022, at 67, but his spirit lives on through the lives he touched. He was preceded in death by his parents, Cristobal and Janie Sosa. He is survived by his loving siblings Xavier and Wilma Sosa, David and Ellen Sosa, Rick and Donna Sosa, his children Christopher Sosa, Amber, and Blair Carroll, Brandon Sosa, the mother of his children, Lillie Artale and his grandchildren Andrew Sosa, Jace Sosa, Gemma Barnett, Luke Carroll, Lilly Carroll, Payton & Tania Alvarez, Triston Alvarez and Baylee James and Great Grandchildren PJ Alvarez & Gates Ellegard. Roy was a graduate of Crockett High School Class of 1973, Ranger Junior College (1973-1975), and proudly held a Bachelor of Science from Pan American University (1979). While obtaining his degree, he received recognition for the following accomplishments, which his family will cherish. ⁃Co-Captain 1975 World Series Finalist (NJCAA) ⁃2 year Letterman ⁃Pan American MVP 1977 ⁃Signed professional contract with Houston Astros (1977) ⁃.315 collegiate and professional hitter Many know and will remember Roy for his dedication to the game of baseball. He acquired countless awards, accolades, and community notoriety for his personal achievements on the field. Most notably, Roy became an enthusiastic and well-loved coach for the Austin Independent school district. He shared his skill and passion for all sports with many youths in his beloved hometown of Austin, Texas. He led his teams to numerous victories with his talent and technique, but his devotion to the students made him an effective coach. His dedication to mentoring and guiding his athletes left a lasting effect and will always be remembered. Over the years, he devoted his time to Pearce Junior High (1979-1988) as the Athletic Director/Head Coach, Regan High School (1988-1994) as the Basketball and Assistant Baseball Coach, Johnston High School as the Head Baseball Coach/Vocational Coordinator (1998-2003), Austin Community College as the Head Baseball Coach (2003-2004). While most of his time was spent on the field, his time off the field as the owner of Quality Trophies on S. Lamar was equally rewarding. His work revolved around designing and manufacturing awards for athletes who excelled at their chosen sports. In addition to his incredible contributions to the Austin community, Roy was a wonderful father and beloved grandfather. He will be remembered for his exuberant sense of humor and larger-than-life personality. There wasn't a place he couldn't go where he didn't bump into someone who knew him, someone who loved him, an old friend from the field, or a student who he mentored. Many from his hometown of Austin, Texas, will feel the loss of a local personality. Although he is no longer with us, his legacy and words of coaching wisdom will continue to thrive in the hearts and minds of those who love him. We will miss you #33 and as you would so often say “ It’s a long fly ball, it’s going, it’s going, it’s gone! And so am I! Services for Roy Sosa will be held on Wednesday, May 18, 2022 1:00 Mass San Jose Catholic Church 2435 Oak Crest Ave, Austin, TX 78704 2:30 Burial Assumption Cemetery 3650 S I-35 Frontage Rd, Austin, TX 78704 4:00-7:00 Celebration of Life / Food and Beverages 1187 Branch St. Austin,TX. 78702 Please RSVP by May 13th with Chris Sosa via text at 512-576-8044 if you plan to join us for some good old fashion Browns BBQ. Please provide first name, last name and number in your party.

Born and Raised: Austin, Texas Longtime coach, loving father, son, and brother Roy Sosa passed on March 26, 2022, at 67, but his spirit lives on through the lives he touched. He was preceded in death by his parents, Cristobal and Janie Sosa.... View Obituary & Service Information

The family of Roy Sosa created this Life Tributes page to make it easy to share your memories.

Send flowers to the Sosa family.