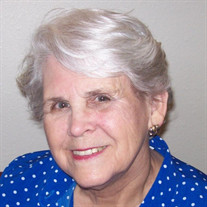 Ruby Marie Spangler, 89, of Round Rock, TX, lost her fight with congestive heart failure and dementia on May 26, 2021. She was born to the late John D. and Rebecca A. Breon, December 5, 1931, in Dallas, TX. During her life, she lived in Texas, Pennsylvania, and Arkansas, before coming back to Texas the last 20+ years. Ruby is survived by her first husband and father of her children, Charles Bressler, Sanger, TX; three children: Michael Bressler (Kathy), Allen, TX, Kathi Sever (Dale Reash), Tarpon Springs, FL, and Sherri Beck, Austin, TX. She is also survived by three grandchildren: Michelle Henderson (Sam), Natalie Groesbeck (Kevin O’Neill), and Michael Bressler; three great-grandchildren: JR, Sammy, and Rebecca Henderson (Bradley Young), and one great-great-grandson, Nolyn Young. She is also survived by her sister, Anna Carver, and brother, Robert Breon, four stepchildren, and numerous step grandchildren, nieces, nephews, and cousins. She also left behind her long-time best friend, Barbara Krause, of 60 years and her newest best friend, Gary Hinkie, who quickly became Hānai (adopted family). The family would like to thank Gary for everything he did for Ruby during the last few years of her life. Ruby was predeceased by her husband of 22 years, George Spangler; daughter, Vicki Drake; brothers, Richard Breon and John D Breon, Jr.; niece, Gale Mills; sister-in-law Joannie Breon, and brother-in-law, Kenneth Carver. Her great granddaughter, Becca, summed her life up perfectly: “She was always so kind, silly, loving, and stubborn. I remember over the years she was always making everything into a song.” Most of Ruby’s life was spent as a mother and housewife. She worked for a marriage counselor, for the Dallas County tax office, and as a medical records technician. Ruby enjoyed traveling, crafting, bluebonnets, and giraffes. Ruby’s life will be celebrated at a future date in Round Rock, with her ashes scattered in Myrtle Beach, SC. Donations in her honor can be made to the American Heart Association or the Dementia Society of America.

Ruby Marie Spangler, 89, of Round Rock, TX, lost her fight with congestive heart failure and dementia on May 26, 2021. She was born to the late John D. and Rebecca A. Breon, December 5, 1931, in Dallas, TX. During her life, she lived in Texas,... View Obituary & Service Information

The family of Ruby Marie Spangler created this Life Tributes page to make it easy to share your memories.

Send flowers to the Spangler family.