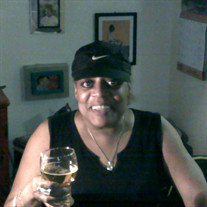 Sharon Marie Yancey, 64, passed away peacefully on March 2nd, 2017 in Austin, Texas, after a long illness. Sharon was born on February 13th 1953 in Montana, then spent her childhood and young adult years in Portsmouth, New Hampshire. Sharon Marie Yancey, who was also known as Sharon Yancey Lilly, leaves behind her son, Jamaal Dwayne Lilly, to fulfill her legacy of spreading peace. Sharon is preceded in death by her mother, Sybil Hermina Powell Yancey, her father, Henry Broaden Anthony Yancey, her sister Greta, and her brothers Ricky and Billy. In addition to her son Jamaal, Sharon is survived by her brother Anthony and her sisters Lorraine, Madonna, Terry and Michelle, as well as numerous nieces and nephews, stepchildren, grandchildren and great-grandchildren. Sharon was a professional singer and model for many years, and music and singing were always her passion. Sharon dedicated her life to raising her son. She was a follower and believer of Jesus Christ. She was a very giving person and always helped those in need. She would help and believe anybody in need. Sharon’s mother, Sybil Hermina Powell Yancey, was a queen from the Cayman Islands who moved to the United States when she married. Sharon’s father, Henry Yancey, was a U.S. veteran. Although Sharon’s family kept close ties to their heritage in the Cayman Islands, Sharon, as well as her parents, felt that the United States was their home. Sharon grew up in New England, and lived as an adult in the Houston, Texas area, in Austin, Texas and in the Orlando, Florida area. Sharon had lived in Austin for the past ten years. Those who were lucky enough to know Sharon will remember her for a smile that could light up any room, her beautiful voice, her generosity and kindness, and her great laugh and love of life. Sharon had a great many sayings of wisdom, including “one hand turns the other”, “what goes around comes around”, “to each his own”, and one of her personal favorites, “Say Hey!” Sharon lived a full life and leaves behind many friends and loved ones. Sharon always signed cards and letters with “Love and Light” - that simple phrase truly embodies the spirit of Sharon. Sharon would want those that knew her to keep her memory alive by practicing peace and kindness, and always fighting the good fight for truth and justice.

The family of Sharon Yancey Lilly created this Life Tributes page to make it easy to share your memories.

Send flowers to the Lilly family.