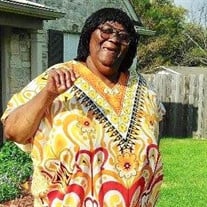 On Friday, August 31, 2018, our beloved wife, mother, and grandmother Shirley Williams went peacefully to rest at Metroplex hospital of Texas. She was born in Portsmouth, Virginia on July 6, 1942 to the late Josephine Andrews and William Stokes of North Carolina. This is where she was united in matrimony to her late husband, Robert Williams. From their union came Deneen Williams Johns, Felesia Williams, and Antonio Williams (Cecilia). Before marriage, she birthed Brian Herbert and Larry Stokes (Tracey), and then came her last child, Phyllis Williams. From her late husband’s prior marriage, she also gained loving step daughters and sons. Those include Theresa Blount (Wesley), Renita Bridgers (Edward), Pamela Battle, Robert Williams (Pookie—Bernadette), Evelyn Hart, Dorothy Mourning, and Otelia Ponton-Reid. Shirley was a stay at home mother who poured all her love, time, and compassion into her children and grandchildren. She was a mother figure to many, and the glue that held the family together. Her kind, giving, and nurturing spirit brought light and life into her family, home, and the life of many others who knew and adored her. She leaves not to mourn but rejoice in her memory her brother William Stokes (Sugarman), her loving children and step children, as well as her grandchildren Randi, Kiara, and Angelique Johns; Donte and Dominique (Veronica) Speller, Kiarra Stokes; Cerita and Tonisha Williams; Keyshara Williams; Antonio (Davina) and Antoinette Williams, Kerri Baxter, and numerous great grandchildren, family and friends. She was preceded in death by her brother Terry Battle, sister Rita Battle, step daughter Michelle Williams, and stepson Antonio Nathaniel Williams (Nut).

On Friday, August 31, 2018, our beloved wife, mother, and grandmother Shirley Williams went peacefully to rest at Metroplex hospital of Texas. She was born in Portsmouth, Virginia on July 6, 1942 to the late Josephine Andrews and William Stokes... View Obituary & Service Information

The family of Shirley Mae Williams created this Life Tributes page to make it easy to share your memories.

Send flowers to the Williams family.