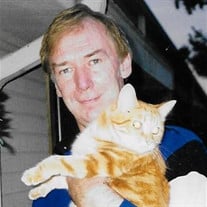 Stephen Murphy, aged 69, died on Sunday, October 14, 2018, following a brief illness. Steve was preceded in death by his father, Stephen Murphy, and his cat, Orange Guy. He is survived by his loving mother, Dolores; siblings Eileen (Jim) Busenbark; Dennis (Barb) Murphy; Mark (Julie) Murphy; and Mary (Rich) Swift. Additionally, Steve’s beloved nieces and nephews mourn the loss of their Uncle Steve AKA Uncle Stevie-Bird, Uncle Oats, and Uncle Oatsie-Potsie: Veronica, Elizabeth, Emily, Brian (Megan), Kevin (Daina), Chris, Sean, and Ryan. Great nieces and nephews are: Eryn, Camryn, Kathryn, Andrew, and Atticus. Steve had many friends here in Austin, which was his home for the past 20 years, as well as in Omaha, NE and the Georgetown-Washington, D.C. areas. Steve’s friendships were not confined to those whom he could see in person, he had several on-line groups that he belonged to as well as his Facebook page and his cat, Orange Guy’s , FB page! Steve loved and greatly enjoyed talking about any and all subjects with all who would listen and participate! He was prolific in his thoughts and took much delight in sharing them in both spoken and written form! Folks who knew Steve knew that he had a great love for music from the 60s and early 70s! We played many of his favorites for him with lots of selections from The Eagles, per his request. Next time you are singing along to the radio or at your local karaoke spot – pick a song to sing and dedicate it to Steve – He would love that! Steve was raised in the Catholic faith and attended Archbishop Rummel H.S., Creighton University, and Georgetown University where he studied Philosophy, Sociology, and History. He admired and sought out conversation and learning experiences with his teachers and professors, particularly those of the Jesuit Order. Steve always admired those priests for their intellect and constant search for knowledge. The family wishes to extend their gratitude to Russell and Sean (Steve’s friends and roommates) for their loving support and care over the years, and especially during these last six months. A heartfelt thank you is also sent to Fr. Carlos Esparza, SJ, for visiting Steve and offering prayers of love and compassion for him and the family. There are several nurses and staff at West Oaks Rehab to thank: Adam, who connected so well with Steve and understood his concerns and pain and helped in any way that he could. Danita was Steve’s nurse the night he died and she could not have been more kind or loving toward him or us. Bethany, the Social Worker, always had a soft word and sweet smile whenever we had questions. The staff with Guiding Hospice was incredible and helped Steve and the family in any way that they could. Mike, the hospice nurse for Steve’s last hours was a true angel! Memorial donations in Steve’s memory are suggested to Austin Pets Alive! (APA), any animal shelter of your choosing, Guiding Hospice of Round Rock, and/or to the Democratic Party. Steve would want to impart that a big regret is that he wouldn’t be alive to vote in this, and any other election. In memory of Steve, PLEASE educate yourselves on the people and items on your ballot and VOTE IN THIS AND EACH AND EVERY ELECTION! Remember, Steve was a political fundraiser and believed that it was every person’s civic duty to be involved in all processes of local, state, and federal government! Graveside service will be held at 10:00 AM, Saturday, October 20th, at Assumption Cemetery, 3650 S IH 35 Frontage Rd, Austin, Texas 78704. A reception and Celebration of Steve’s Life will follow the burial at the home of Mark and Julie Murphy.

The family of Stephen Michael Murphy created this Life Tributes page to make it easy to share your memories.

Send flowers to the Murphy family.