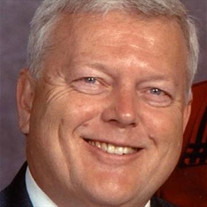 Steven Lee Jeske, 69, of Cedar Park, returned to his heavenly home on Thursday, January 24, 2019. Steve’s devotion to his family and firm belief in God provided comfort during a valiant battle with cancer. Steve grew up in Grand Haven, Michigan and graduated from Concordia University (Seward, Nebraska) in 1972 with a BS in Education. Steve also graduated from the University of North Texas in 2003 with a MS in Education Technology. He loved to learn new things, from fixing his project vehicles, starting new plants in his greenhouse, or caring for his beehives. Steve was kind, smiled often, and was an educator at heart. He loved fishing, but enjoyed catching everything from bluegills and striper to kingfish even more, especially at his annual fishing trip with the guys or at Lake Travis with the grandchildren. Steve loved living life to the fullest, which included many RV trips with his wife and friends. A favorite part of his week was singing with the choir, meeting good friends for his coffee group, and developing deep and meaningful friendships throughout his life. Steve was incredibly pleased each year to hold Grandparent Camp and arranged a special trip for each grandchild around their 10th birthday. Fun memories resulted from each yearly Jeske gathering and he thoroughly enjoyed one of the trips of his lifetime, a family trip to Mexico a week just before his cancer diagnosis. Steve was blessed with a large and loving family. He married his best friend and college sweetheart, Marilyn (Broker) Jeske in 1973 and provided an excellent example of a long, loving marriage for 45 years. He was so very proud of all of his children and the lives they lead. Steve is survived by his wife, Marilyn, his 4 children, Nathan (Jenny) Jeske, of Garden Ridge, TX, Sarah (Lucas) Land, currently of Bolivia, Peter (Kim) Jeske of Austin, and Matthew Jeske (fiancee Kristy Parker) of Nashville, TN; his 6 grandchildren Grace Jeske, Jacob Jeske, Aaron Jeske, Asher Land, Lydia Land, and Dorothy Land; his siblings Bob Jeske, Dan Jeske, and Linda Jeske. He is preceded in death by his parents and brother, Mike Jeske. He will be missed dearly, but held onto his faith, led a blessed life and is safe and loved in the arms of His Lord. A memorial service will be held at 11:00 a.m. Thursday, January 31st, at Redeemer Lutheran Church in Austin, Texas. Memorials may be made to the Music Ministry at Redeemer Lutheran Church, 1500 West Anderson Lane, Austin, Texas 78757.

Steven Lee Jeske, 69, of Cedar Park, returned to his heavenly home on Thursday, January 24, 2019. Steve’s devotion to his family and firm belief in God provided comfort during a valiant battle with cancer. Steve grew up in Grand Haven, Michigan... View Obituary & Service Information

The family of Steven Lee Jeske created this Life Tributes page to make it easy to share your memories.

Steven Lee Jeske, 69, of Cedar Park, returned to his heavenly...

Send flowers to the Jeske family.