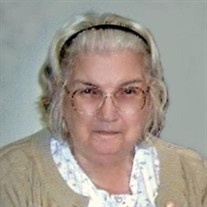 Sylva Ann Heinzke, formerly Sylva Ann Anderson (maiden name) and Sylva Ann Grimes, passed away on Friday, July 24th, 2020, at Austin Wellness and Rehabilitation in Austin, Texas, where she resided for the last year and a half. Sylva Ann was born on a farm in Comanche County, Texas, on December 6, 1931, the eldest child of Armer Nathaniel Anderson and Ada Eugenia (Beck) Anderson. She was preceded in death by her brothers and sisters: Truman Dale Anderson (the 1st) of Mississippi, Mrs. Patsy Jene Gillentine of Sweetwater, George Mitchell Anderson of Copperas Cove, and Mrs. Billie Wheeler of Copperas Cove and Harker Heights, Texas. She is survived by two sisters-in-law, Tommie Anderson of Columbia, Mississippi, and Katherine Anderson of Copperas Cove. She graduated from DeLeon High School in 1949. She briefly worked at the Traveler’s Hotel in downtown De Leon and married Bobbie Gene Grimes of DeLeon after he returned from the Korean conflict. They lived in Eastland for a while until Bobbie was deployed to Germany, where they lived for two years. Upon returning to the states, they lived in Copperas Cove, near Fort Hood, Texas, where Bobbie was stationed and where her last five children were born. In 1968, not long after Bobbie retired from the military, the family moved to Austin. Bobbie passed away in 1972. In 1975, Sylva Ann remarried to Charlie Heinzke of Austin, who passed away in 1979. Sylva Ann was a homemaker most of her life, but she worked many years as the seamstress for Sheplers Western Wear in Austin until she retired in 1993. Sylva Ann, her daughter, Betty Ann, and granddaughter, Della Polvado, shared a house in Austin and took care of each other for many years. Sylva Ann had seven children and two daughters-in-law: Charles Robert and Marianne Villasana Grimes of San Antonio, Betty Ann Grimes of Austin; Martha Sue Grimes (deceased), Lynda Ruth Polvado (deceased), James Anderson Grimes of Killeen, Larry Gene and Tammy Grimes of Temple, and Janice Annette Grimes (deceased). Sylva Ann also had a step-daughter and her family through her marriage to Charlie Heinzke; Darlyne and Lloyd Law of Round Rock, and their son Matthew. Sylva Ann had six other grandchildren and four great-grandchildren: Della Polvado of Leander, Welton Polvado of Austin, Sarah Jewell of Arkansas, Christopher Grimes (deceased), Edward Grimes of South Carolina, and Necie Ann Grimes (deceased). Sylva Ann’s great-grandchildren include David DeShawn Harrison of Leander, Haley Wilson and Blake Wilson, both of Arkansas, and Ravyn Grimes of Pennsylvania. She is remembered by many nieces and nephews of the Gillentine, Parker, Wheeler, Nejtek, Anderson, and Grimes families of Louisiana, Oregon, and Texas. There will be a viewing at Austin Affordable Burial at 13009 Dessau Road, Suite M, Austin, Texas, on Friday, August 7, from 5 to 8 pm. On Saturday, August 8, there will be a grave-side service at the DeLeon City Cemetery at 680 W. Reynosa St. in DeLeon, Texas.

Sylva Ann Heinzke, formerly Sylva Ann Anderson (maiden name) and Sylva Ann Grimes, passed away on Friday, July 24th, 2020, at Austin Wellness and Rehabilitation in Austin, Texas, where she resided for the last year and a half. Sylva Ann was... View Obituary & Service Information

The family of Sylva Ann Heinzke created this Life Tributes page to make it easy to share your memories.

Send flowers to the Heinzke family.