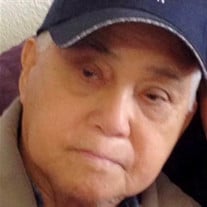 Toribio “Terry” Malabanan of Killeen, TX, left to be with his Creator on January 13, 2018 at a local hospital surrounded by his family. He was 91 years old. He was born on April 27, 1926, to Gaudencio and Justina Malabanan in Batangas, Philippines. He was the fourth of ten children. A World War II veteran, Terry spoke highly of his service. He joined the Philippine Scout in 1946 and fought alongside the US forces. He served with HQ 230th FA Bn as a Corporal, to which he received the Philippine Independence Ribbon. As hard as life during war may have been, he loved retelling the stories to anyone who would ask. In 1995, he was given the chance to become a US citizen and live in America, as the nation’s gratitude for his service during the war. He’s lived in Queens, NY, Athens, GA, and Killeen, TX, since leaving the Philippines, giving him an opportunity to form and develop lifelong friendships along the way. Fondly called as ‘Tatay’, a Filipino endearment term which means father, he’s been looked upon by close friends and families as their own father. He will always be remembered as the loving, soft-spoken, and gentle-hearted dad. Even with physical limitations due to a major stroke that he suffered in 1998, he still loved going to church and listening to God’s Words. He was the prime example of a servant that his family had always looked upon. Terry loved singing along as well as listening to praise and worship songs. His favorite songs were ‘Majesty’, ‘I Give You My Heart’, and ‘How Great Thou Art’. Terry was preceded in death by his parents; his first wife Marlyn (d. 1974); his siblings Cleotilde, Braulio, Fermina, Juan, Primitivo, and Elena. He is lovingly remembered by his wife of 43 years, Alma; his daughters Milagros, Gloria, Marilyn (Danilo), Cristina (Francisco), and Lourdes (Aubrey); his grandchildren Vanessa (sp: Vernie; ch: Vhalerie Joy, Aubrey Jhade, Jhaneo Ace, Ac Queen), Michelle (sp: Eric; ch: Franzine, Judier, Erich, Zianne), Marie Christine (sp: Philip; ch: Angelina), Ann Margarette (ch: Zyron, Tyron, Thea), Christopher, Jeffrey, David, and Kathryn; siblings Juana, Ceferino, and Pablito. Visitation is scheduled from 5pm to 8pm on January 22, 2018 at Affordable Burial and Cremation Service (2006 N W S Young Drive #60, Killeen TX 76543). A memorial service will be held at Grace Christian Center (1401 East Elms Rd, Killeen TX 76542) on Tuesday, January 23, 2018 at 12pm. Burial will follow at the Central Texas State Veterans Cemetery (11463 TX-195, Killeen TX 76542) at 2 pm. In lieu of flowers, please consider giving monetary gifts during this difficult time. A gofundme campaign has been initiated for his family. (https://www.gofundme.com/terry-malabanan)

The family of Toribio 'Terry' Malabanan created this Life Tributes page to make it easy to share your memories.

Toribio “Terry” Malabanan of Killeen, TX, left to be with his...

Send flowers to the Malabanan family.