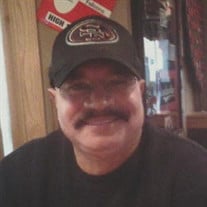 On Thursday, July 9, 2020, Tyree Holt, Jr., was welcomed to be with his ancestors in paradise at the age of 67. He was born Saturday, April 25, 1953 in Hollandale, Mississippi as the 5th oldest son of the 18 children of the late Tyree Holt, Sr., and Amelia Holt. Tyree attended Simmons High School and graduated in 1973. Following high school, Tyree enlisted in the United States Army and retired after 26 years as a Sergeant Major (SGM/E9) and Combat Veteran. Tyree moved to California where he went to the California Department of Corrections and Rehabilitation (CDCR) Academy to become a Correctional Officer and finished his 16-year career as a Retired Correctional Lieutenant in 2016. He moved to Texas following his Corrections retirement in 2018 with his wife, Dina Holt. In the week leading to his parting, he bid his final goodbyes and passed with his wife of 26 years by his side. Tyree was a reserved man with an infectious charisma. He was born with an innate pride, discipline, and proudness that served him profoundly in establishing the Holt name throughout his life. He was a notable musician and track athlete in his youth; he still holds the top record for the 220-yard dash at his high school today. His true brilliance however, beamed during his career in the Army. During his transcendence and time as “Top” 1SGT, he conducted himself with exemplary leadership and an immaculate demeanor that was “regimented and stern but fair and consistent” that all who crossed paths with him, respected and emulated in their own careers. He continued his support of the military upon his retirement by contributing to the Wounded Warrior Project. Tyree’s transition to his final career in Corrections was a smooth one with the groundwork and fundamentals instilled in him. He was noted as being “…exactly what I, and the troops, needed” when he arrived. During this season, many of his colleagues enjoyed their conversations with him where he provided insightful wisdom about life and work. Tyree was a devoted hard worker and provider who also knew how to have a good time. When he was out of uniform and with his close friends or family at the annual Holt Family reunion, he was the life of the party with an infectious laugh and charming smile. In his leisure, he enjoyed listening to soulful music, eating a hearty feast, spending time at the gun range, gardening, barbecuing, and watching old westerns, cartoons, and criminal shows. When his children and grandchildren came together, he would take them on family outings to bowling and swimming on base, movies, Disneyland, local landmarks, parks, and more. Tyree was born into and created an abundance of family, all of whom will greatly cherish and honor his memory and legacy. He is survived by his wife; Dina Holt, six children; Alexander Holt, Keia Holt, Daneeka Holt, Quinn Arce, Akira Holt, and Tyra Holt; grandchildren and great-grandchildren; 12 siblings; Hazel (James) Johnson, Earnestine (Phillip) Jackson, Charlene (Thomas) Mead, Lula (Lawrence) Gilliand, Susie (Willie) Johnson, Joeann (Moses) Clay, Charlie (Bessie) Holt, Earl Henry Holt, Gloria (Sylvester) Hunter, Sylvester (Loretta) Holt, Cynthia (Giles) Hibbler, and Gwendolyn (Glen) Faulkner; nieces, nephews, great-nieces, and great-nephews, and finally, close family-friends. Preceding him in death are his parents; Tyree Holt, Sr. and Amelia Holt, four brothers; Kevin, L.C., Robert, and James Holt, his first wife; Jackie Holt, his son; Candy Holt, and his recently deceased sister; Ruth Holt. To those who wish to honor Tyree, in lieu of cards, flowers, or a service per his request, feel welcome to contribute to the Wounded Warrior Project, a charity he valued. If you would like to celebrate him, take a quick moment before you enjoy that Sunday dinner of Southern delights to send him your light and love. You can even listen to his favorite music while you barbecue to celebrate him. If you would like to send any condolences or notes to his wife and family please email them to this address: [email protected]

On Thursday, July 9, 2020, Tyree Holt, Jr., was welcomed to be with his ancestors in paradise at the age of 67. He was born Saturday, April 25, 1953 in Hollandale, Mississippi as the 5th oldest son of the 18 children of the late Tyree Holt,... View Obituary & Service Information

The family of Tyree Holt Jr. created this Life Tributes page to make it easy to share your memories.

Send flowers to the Holt family.