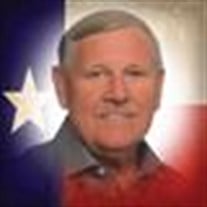 Uwe E. “Sam” Samuel June 19, 1953 – January 25, 2021Uwe E. Samuel, 67, of Copperas Cove, Texas, went to be with the Lord, January 25, 2021, at St. David’s North Medical Center in Austin, Texas. Sam was born in Hannover, Germany, on June 19, 1953, to Ursula Koggel and was raised by both Ursula and his father, Bobbie E. Samuel. Sam became a resident of Copperas Cove in January of 1974 to join his beautiful fiancé’ Debbie and her family. Sam began his military service in the United States Army the same year as an enlisted armored tank crewman stationed at Fort Hood, Texas, for his first 4 years of service. Shortly after beginning serving his country, he wed his soulmate and best friend, Debbie O. Bedsole, in 1974. Prior to separating from the U.S. Army, Sam began to pursue his career in Real Estate. He began his long and successful adventure by getting his Real Estate License in 1978. After attending Central Texas College, he graduated with an Associate’s degree in Business Administration in 1980 and obtained his Broker’s License in 1981, where he served the residents of Central Texas for over 43 years. He opened his own brokerage, Century 21 Diamond Realty, Inc., with Debbie, in 1993 and in 2017 transferred ownership. Sam’s desire to serve the community continued as an active member of the Chamber of Commerce, an annual volunteer for the Rabbit Fest, little league baseball coach and an avid supporter of The Copperas Cove Bulldawgs. In 1985, Sam joined the Texas Army National Guard and served for 28 years. His service included Soldier Readiness in preparation for missions and deployments within the United States and Overseas which led him to his retirement in 2013. Although his number 1 priority was being a devoted and a loyal husband, Debbie continually shared Sam with everyone. He was always the Life of the party, the sideline official and the quick witted agitator on a regular basis. The monarch continued to be the most reliable and caring man to his two daughters and four grandchildren. Sam was preceded in death by his father, Bobbie E. Samuel, his younger brother, Marcel Samuel and his grandparents whom descended from Germany. Sam is survived by his loving wife, Debbie O. Samuel, his two daughters, Amanda Nicole Bruce (Terry), Lauren Michelle Pearce, four grandchildren, Braedon Samuel Pearce, Hayden Kohl Welch, Logan Nickohlis Welch and Marcella Grace Watkins, his mother, Ursula R. Samuel, his sister, PalmolitaGoodwin (Sean), his nephew, Colby (Kayla), his 3 great nieces, Addison, Karlie and Emerie, his military family and many friends. Visitation will be Sunday, February 7, 2021, from1:30 p.m. TO 4:30 p.m., at Victory Baptist Church in Copperas Cove. The funeral service will be Monday, February 8, 2021, at 12:30 p.m., at Victory Baptist Church in Copperas Cove, with immediate procession to the Central Texas Veterans Cemetery,for the burial at 3:00 p.m. Services will be streamed live on the Victory Baptist Church Facebook page. MASKS WILL BE REQUIRED AT ALL SERVICES. In Lieu of flowers, the family requests any charitable donation in honor of Sam to be made tothe Pulmonary Fibrosis Association of Texas at www.pfatx.org or to the Victory Baptist Church buildingfund.

The family of Uwe Erwin Samuel created this Life Tributes page to make it easy to share your memories.

Send flowers to the Samuel family.