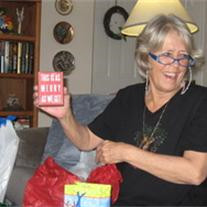 Vicki Drake February 2, 1951 ? October 4, 2013 Vicki Drake, 62, of Austin, Texas, (formerly of Dallas) passed away on October 4, 2013, at Brackenridge Hospital from an ongoing illness. Born Vicki Marie Bressler in Millmont, Pennsylvania, she was impatient to come into the world and was born at home during a snowstorm. In 1952, her parents moved to the Dallas area where Vicki was raised in Mesquite and lived most of her life. In 1984, she moved to the Austin area where she has lived most of the time since. At the time of her death she was the office manager of Captain Mac?s Marine in Austin, Texas. Vicki loved and collected all things squirrel and snowman related. She also loved salt water fishing and being at the coast. She definitely lived life the way she wanted. Vicki was preceded in death by her grandparents (John & Rebecca Breon and Lula & David Bressler), stepfather (George Spangler), and two stepmothers (Louise Bressler and Betty Canty Bressler). She is survived by her daughter Michelle Henderson and son-in-law Sam Henderson of Gordon, Texas; grandchildren, J.R. Henderson of Fort Worth, Texas, Becca Henderson and Sammy Henderson of Port Richey, Florida; mother, Ruby Spangler of Round Rock, Texas; father, Charles Bressler of Sanger, Texas; brother and sister in law, Michael and Kathy Bressler of Allen, Texas; sister and brother in law, Kathi Sever and Dale Reash of Tarpon Springs, Florida, and sister, Sherri Beck of Austin, Texas; three stepsisters, Jimmy, Becky and Tammy, and their families. She is also survived by nieces, nephews, aunts, uncles, and cousins. A family and friends gathering was held on Sunday, October 6 in Round Rock, Texas. Due to her love of the salt water, her ashes will be scattered in the Gulf of Mexico by family and friends. If you would like to make a donation in memory of Vicki, please give to the American Liver Foundation, 39 Broadway, Suite 2700, New York, NY 10006, or http://www.liverfoundation.org/howtohelp/.

The family of Vicki Drake created this Life Tributes page to make it easy to share your memories.

Send flowers to the Drake family.