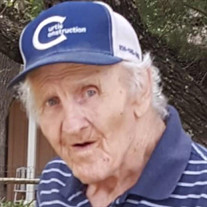 Walter Dee Reece left the confines of his earthly body and went to be with his Lord and Savior on September 29, 2020. He was 80 years and 5 months old. Walter was born in Austin, Travis County, Texas on April 20, 1940 to Charlie Austin and Myrtle Violet Grace Reece. He was two weeks shy of being 7 years old when his mother died. As he got older, he had a little red motor scooter that he would ride everywhere. His home was in the homes of his family members – brothers, sister, aunts and cousins - all sharing their lives with him. In the late 1970’s, Walter was hit head on by a careless driver, causing severe head injuries. His life was put on hold for a long time while he recovered. Walter went to the eighth grade before taking up his family’s trade and following in the footsteps of his brothers and his father by becoming a rock mason. He worked at that occupation his entire life. But he always found time to pursue his favorite sports – going fishing and looking for that big buck! Walter was led to Christ late in life and he attributed his nephew, Ralph, for taking time to pick him up and take him to church. Walter could occasionally show a temper, but he was generally a gentle and caring man. His last couple of years were in the Windsor Nursing Home where he was known to share his faith. There was one gentleman in a wheelchair that Walter always went to get at mealtime. Walter helped push him to the cafeteria to share their meal. Walter was preceded in death by his parents and his brothers, Clarence (Dude), Charlie (Fat) and Lewis Reece. He is survived by his sister, Betty Ruth Hovey and her husband, Julian, of Manchaca, and his brother, Robert Leon Reece and his wife, Betty, of Spicewood. In addition, he is survived by one daughter, Cheryl, and numerous nieces and nephews. So it was that the beggar died and was carried by the angels to Abraham’s bosom. The rich man also died and was buried. Luke 16:22 Jesus told us in this parable that the dead in Christ are carried to His bosom by the angels. Walter has been carried away. His body has been laid to rest on October 1, 2020, next to his mother in the Live Oak Cemetery in Manchaca, TX.

Walter Dee Reece left the confines of his earthly body and went to be with his Lord and Savior on September 29, 2020. He was 80 years and 5 months old. Walter was born in Austin, Travis County, Texas on April 20, 1940 to Charlie Austin and... View Obituary & Service Information

The family of Walter Dee Reece created this Life Tributes page to make it easy to share your memories.

Walter Dee Reece left the confines of his earthly body and went...

Send flowers to the Reece family.