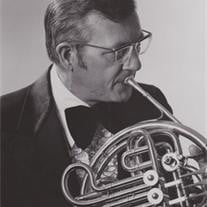 Wayne R. Barrington, of Austin, Texas, died Saturday, July 23, 2011, at The Plaza at Querencia at Barton Creek after a short residency there due to idiopathic anemia. He was well attended by the caring staff there, as well as those of Texas Home Health Hospice, and was in the regular company of loving family and former students. Born in Schenectady, New York, on April 13, 1924 to Clarence and Elizabeth Barrington, his family moved to Detroit when he was 2 and finally settled in Worcester, Massachusetts in 1932. His parents were both amateur musicians with a shared sense of humor and a passion for music. Their guidance and connections with professional members of local orchestras helped Wayne to enter the New England Conservatory for music upon his graduation from high school in Worcester in 1942. Here he began his formal studies, which would lead to a long, successful career as a horn player and educator. His education and playing were twice interrupted by his service in the United States Army. First, when he was drafted into the 66th Division General Infantry band in 1943, where he served and entertained troops in Germany and France during WWII, after narrowly escaping disaster as his ship followed the doomed SS Leopoldville, torpedoed and sunk on its way to reinforce the Battle of the Bulge on the night before Christmas, 1944. He returned to his education at the New England Conservatory, and had begun playing professionally with the San Antonio Symphony when he was called back to serve in Korea in 1950, where he later became a member of General MacArthur?s headquarters band in Tokyo and had the opportunity to play for MacArthur?s farewell ceremony. After completing his service with the military, Wayne continued with an inspiring musical career, which comprised various positions in many major symphonies across the country, most notably as third chair horn with the Chicago Symphony under Fritz Reiner from 1954 until 1964, and finally as principle horn with the Austin Symphony from 1966 until 1988. He was also a professor of horn at the University of Texas School of Music from 1966 until his retirement in the spring of 2001 at age 77. Wayne?s kindness, generosity, sense of humor and passion for music, and excellence within himself and others was greatly recognized and highly revered by colleagues and students alike. His dedication to teaching and personal risk-taking activism for musician?s rights and wages will be appreciated and celebrated for generations of musicians to come. He received the Punto Award at the IHS workshop in Denton in 1991, and in 1999 he personally endowed the Wayne R. Barrington Endowed Scholarship in Horn at The University of Texas at Austin. Wayne was preceded in death by his first wife Janis, his brother Gordon, and his daughter Kathryn Barrington. He is survived by his wife Gayle Horn Barrington, his daughter Margaret Litten and her husband Mark, his daughter Elisabeth Zakes and her husband Chris, his daughter Beverly Barrington Bovbjerg and her husband Blair, and his son Alan Barrington and his wife Lynda; and by six grandchildren, Marisa and Melanie Litten; Rosalind (Zakes) Bradshaw, Robert and Briony Zakes; and Kendrick Barrington; and by one great-granddaughter, Artemis Bradshaw.

Wayne R. Barrington, of Austin, Texas, died Saturday, July 23, 2011, at The Plaza at Querencia at Barton Creek after a short residency there due to idiopathic anemia. He was well attended by the caring staff there, as well as those of Texas... View Obituary & Service Information

The family of Wayne Barrington created this Life Tributes page to make it easy to share your memories.

Send flowers to the Barrington family.