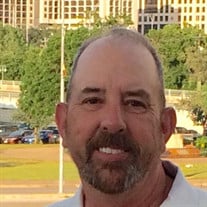 On Friday, May 24, 2019, Maj. William Mark DeWitt, loving husband and father to three daughters, passed away at the age of 59. Born on September 12, 1959 in Cleveland, OH to William Gray and Mary (Herrmann) DeWitt. He was known as Mark by his family & Bill by his friends. He enlisted in the U.S. Army in 1977 and served as tank commander of Bravo Company for the 4/67 1st Armored Division during the Gulf War. Following his discharge from active-duty, Bill became a Physician’s Assistant. Looking for a new challenge, he started his own medical consulting company in 2005. In those years, his love for the military never wavered and he joined the Army National Guard and served during the Iraq War. Bill was a devoted family man, consummate soldier, lover of UT football (Hook ‘em!), and grill-master. He truly enjoyed John Wayne westerns and military movies, which he always watched with his daughters over the years. It didn't matter to him if he had watched them so many times before, he always found a way to explain the real meaning and relevance of that part of history that was being represented. He loved his country and he was proud of his many years of service in the military. College football was one of Bill’s greatest passions. Never has a man owned more burnt orange clothing than Bill. He wore his UT gear year-round and during football season you knew it was game day by the constant barrage of text updates on the score. Originally known for his succulent, smoked Thanksgiving Turkey, over the years Bill’s grilling repertoire grew to include the perfectly cooked ribeye or NY strip (your choice) and a beef Wellington that cut through like butter. Bill’s imposing figure, deep voice, and reserved demeanor could easily give the impression to those who met him for the first time that he was rather a serious and formal person. It only took a few interactions to notice it was his warmth, generosity, and love for his family and friends what defined him. He loved to laugh and make others laugh whether through his sketchy impersonations, animated stories or ridiculous jokes. He was always available to suture up hand wounds from consistent acts of stupidity or when pushed, proffered more elaborate medical advice than “if it’s not falling off, you’re fine”. Consistently clad in a battered Airborne hat, tea-stained Whataburger go-cup and epically dad-style Sperry topsiders, Bill had a penchant for including military lingo into his daily conversation. So in typical Bill fashion, he has “popped smoke” and is Oscar Mike to heaven. Bill was preceded in death by his father, William, and his mother, Mary. He is survived by his wife Sandra, his three daughters, Elaine, Erin and Mia of Austin, TX; his brother Henry and his wife Diane of Aromas, CA; his sisters Mary DeWitt-Dia of Arlington, VA and Sarah Ganswindt of Jackson, WI; and several cousins, nieces and nephews. A memorial service will be held at St. Helen Catholic Church in Georgetown, TX on Saturday, June 29th, 2019 at one-thirty in the afternoon. A military funeral service will be held at the Central Texas State Veterans Cemetery in Killeen, TX on Monday, July 1st, 2019 at two o’clock. The family would like to specially thank the nursing staff from Inpatient Care at St. David’s Medical Center at Round Rock, and the nursing staff at Compassus, for their incredible commitment to Bill’s care. In lieu of flowers, the family has requested donations be made to the American Cancer Society through www.cancer.org.

On Friday, May 24, 2019, Maj. William Mark DeWitt, loving husband and father to three daughters, passed away at the age of 59. Born on September 12, 1959 in Cleveland, OH to William Gray and Mary (Herrmann) DeWitt. He was known as Mark by his... View Obituary & Service Information

The family of Major William Mark DeWitt created this Life Tributes page to make it easy to share your memories.

Send flowers to the DeWitt family.