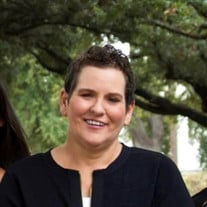 Wilma D. Hill, beloved mother, and granny passed away August 4, 2021, in Killeen, TX at the age of 62. She was born to George and Bernice Hill on March 29, 1959 in Livingston, TX. However, raised as a child at the Methodist Children’s Home, Wilma was a long-time resident of Waco, TX. Wilma received Christ as her Savior at an early age and was a believer. She loved church, even if she could only catch it online. Wilma worked as a CNA for many years before finding a place at Waco Center for Youth, where she really thrived working with the adolescents there. Understanding some of their circumstances because of her own upbringing, she really related to them and several took a special liking to her. One, Kamico, found a special place in her heart and a place in her family. Wilma’s health began to decline, forcing her to leave the workforce. Despite her many ailments she faced over the years, Wilma was a fighter and exhibited great strength. She met no stranger and anyone who met her, fell in love with her. She has two daughters and two grandchildren, with whom she adored and would give her last for. In fact, she always gave her last, even when they didn’t ask. She especially loved her grandkids. Even when her health began to decline, you would still see her on the sidelines cheering them on. She tried to enjoy life to the fullest. She loved people and she loved to dance. She was infatuated with holidays and always wanted the family to come together and celebrate. Her favorite pastimes were fishing, BBQing, and watching every crime show known to man. (lol) She also LOVED HER BAYLOR BEARS!!!! For many years, she yelled and cheered at the tv watching her beloved Bears, mainly the Lady Bears Basketball, men’s basketball, and the football team. Surprising her with a few in person games over the years was a blessing. She also LOVED the Dallas Cowboys, often having the same reactions- yelling and cheering (more yelling with cuss words, LOL) Wilma was very passionate about her sports’ teams. Wilma had many friends, relatives, and acquaintances with whom she would call special. A few held special places, not to dismiss anyone else, but these she felt a unique bond with. She was always happy when she saw and/or spoke to them. (Selso, John, Kamico, Nelson, Kevyn, Kaylyn, Nathan, Ms. Lola, Yulander, Virgie and Julius) The list could go on. She is preceded in death by her parents, Bernice, and George; sisters Brenda and Teresa; and brother Jimmy. Wilma is survived by her daughters, LaKisha Jackson (Lamont) of Dallas, TX and Nikki Wooden of Killeen, TX; her beloved grandchildren, Daja Norman and Christian Wooden, of Killeen, TX; sisters Sheryl and Shannon; brothers Eddie and Troy; a host of beloved nieces and nephews, and friends; extended beloved family from McGregor/Waco/Houston/California/Georgia. She had loved ones everywhere.

Wilma D. Hill, beloved mother, and granny passed away August 4, 2021, in Killeen, TX at the age of 62. She was born to George and Bernice Hill on March 29, 1959 in Livingston, TX. However, raised as a child at the Methodist Children&#8217;s... View Obituary & Service Information

The family of Wilma Darlene Hill created this Life Tributes page to make it easy to share your memories.

Send flowers to the Hill family.